The moment of truth. Will everything go together?  I did a lot of test prints for the tentacles but no big tests for the body.  I did small parts to try out methods and see what I could get away with, but for the most part this was the one and only print for the body.

If you have been following along, you know the cleaning routine.  The was a lot to be done but not nearly as bad as the tentacles.  The only issue was the body halves didn't fit in the ultrasonic cleaner so I had to do one end and then flip it.  (The parts can't touch the bottom of the tank or they may be damaged.) 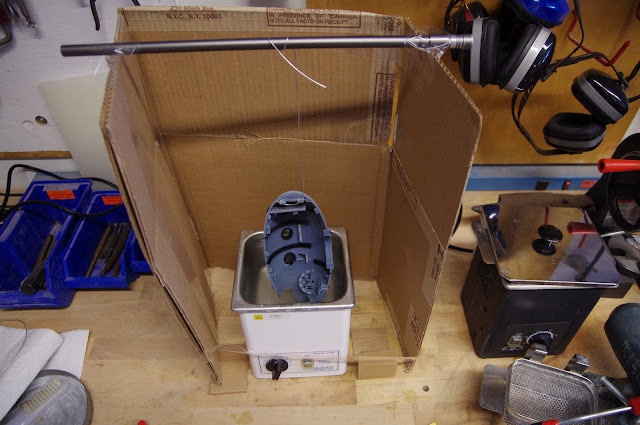 The first problem I ran into was with the cockpit floor.  It was supposed to slide right into the face plate but I put the panel seams where the walls taper in, therefore blocking the floor from going in. Whoops. I sanded down the corners of the floor to clear the side panels but also got dangerously close to some of the screw holes. The other problem I ran into was the scale of some of the features.  Due to limitations of the print material you have to pay close attention to how small parts are.  With the acrylic I printed with you can go down to about 1.5 - 2 mm.  Smaller than that parts will tend to break off during cleaning.  I made the hatch wheels and ladder rungs too small and they either got blasted off by the water jet or broke afterwards.  I quickly built some beefier replacement parts and the lab was kind enough to print them right away.


There was a fair amount of sanding and filing to clean up mating surfaces to get a clean seam, but that was to be expected.  The only major challenge to assembly was the LED lighting.  I did a very good job at designing space for the LEDs to fit in but not such a good job at leaving space for routing the wiring in the cockpit.


I did an time lapse video of the entire build which I will upload soon.