The tentacles have been assembled successfully and everything worked as planned except the webbing for between the tentacles.  The webbing was just too stiff, too big and doesn't look good.  Going to leave them off for now and will print smaller, thinner ones in the future.

The tolerances for the tentacle mounts and hub were more or less good but the matte finish makes a slightly rough surface and I had to do some additional sanding and cleanup.  Also used a little grease on each mount to help the fit.  Check out the photos:

See what I did there.

Designing for 3D printing can involve a lot of Boolean operations where you combine or subtract parts together.  If you have done this before you know it's a pain and often doesn't work well.  Cinema 4D has great boole functions but I have run into a lot of problems combining all of these extruded parts.

Ideally, you want to design and combine all the parts as normal, single shell, primitive or box modeled parts.  But since you have to extrude the parts at some point in order to print, sometimes it's necessary to extrude them for thickness first and then combine them.  This can cause a ton of problems

Here's a walk through of a typical situation I've been dealing with and how to make it work.

UPDATE:  In the video I mention NOT optimizing the parts in Cinema.  After doing this for a while I have found it varies.  Sometimes optimizing screws up things in MeshLab and netfabbb and sometimes it makes things work. Go figure.  Depending on what part I'm working on, I may or may not optimize.

UPDATE 2:  After further investigation this appears to be due to the point optimization tolerance of points and what scale you are working at.  For the Octopod I was modeling at millimeter scale and you can only set the point optimization tolerance so small.  This would cause points to merge that I didn't want to merge and cause weird geometry.  In hindsight, it would have been better to model on a larger scale, like centimeters, then scale down everything for printing.
at 8:29 PM

Here we talk about the aesthetic and mechanical design of the Octopod body and the challenges involved.

I've gotten really, really good at cleaning tentacles to the point where I can now run the brass armature wire through it a few times to get out support material without tearing the rubber.  On a whim I decided to try shooting compressed air through it to drive out some of the support material. This is what happened.

Anyone who has seen "The Thing" knows how terrifying this is.
at 2:30 PM

The following details how the finished piece will function and how it will be designed for assembly after printing. 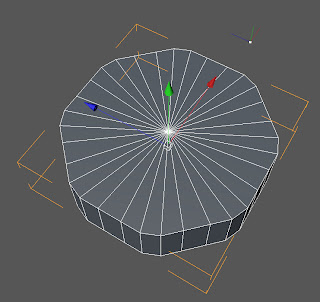 I've had a rough layout of the body for a while and now the fine-tuning has started.  The video is primarily of refining the cockpit housing.  The main difficulty was building an odd-ball primitive to build off of.  It was 16 sided but not all sides were the same length and I had to put in some odd loops to accommodate the scoops that go over the tentacles.  I wanted to box-model this piece so it would flow well from the tentacles, up and back to the main body.  Due to the odd shape, putting in edge loops was a challenge as well. 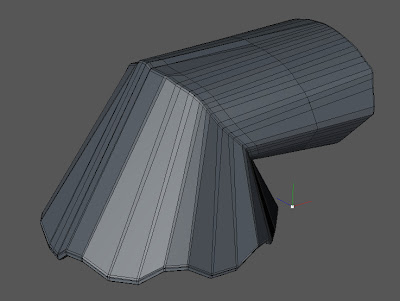 The further challenge will be cutting each body piece to fit with the other, then extruding those pieces so they have thickness otherwise they can't be printed) and figuring out a way that they will all fit together during the physical assembly of the printed model. 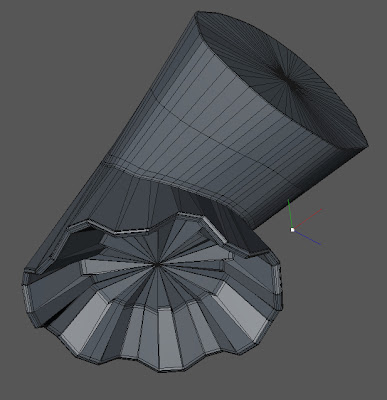 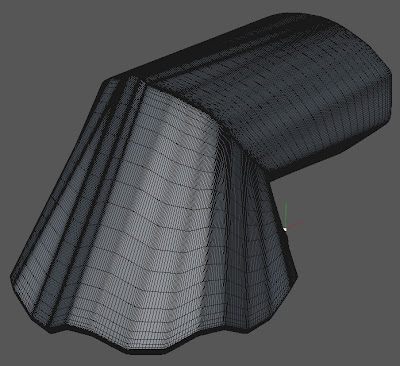 The mesh has to be really dense so it will print without showing any polygons.  This part is a good candidate for decimation which will reorganize and reduce the amount of polygons used.

This is the building of the first tentacle mount. It's been revised but the basic design and methods remained the same.  I tried to speed this up and edit it down but have been having major problems with my screencast software.  A bunch of build videos were corrupted and this is one of the few that I salvaged.

The basic approach for this was to use a knuckle connected to the mount and build a hub that the tentacles would slot into.  Originally I planned on the tentacle having a pivot pin at the base so the whole thing could move but I realized that there wasn't much room underneath for the pins. I also realized that the tentacles are so flexible that the first knuckle could be stationary and there would still be plenty of room to move.  I put the knuckle/mount into an array so they could be positioned evenly.  The hub was then sized to fit the array and slots were booled out.  I had to used a slightly modified version of the mount for booling because the slot has to be bigger  than the original due to mechanical tolerances.