With lessons learned from the first try, I put together another test print before the semester started.  I wanted to make the new tentacle sleeker, more flexible and bigger.  I wanted to try the fused rubber and acrylic one more time as well. 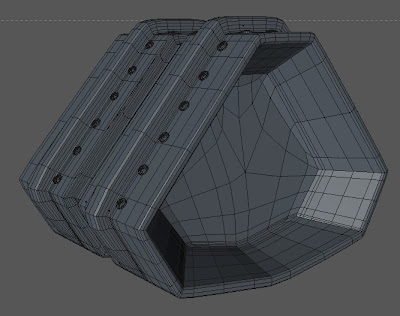 I started from scratch with a totally new knuckle design.  As you will see in the video, the rivets were way too small to print well.  Right now the knuckle is solid and I use the rubber core to cut a hole through the middle. 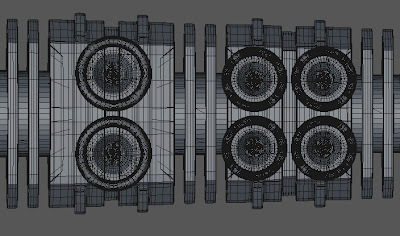 I wanted this tentacle to have a more consistent silhouette, so I put fins between each knuckle that allow for flex but also maintain the look.  The knuckles are then placed along the rubber core and a duplicate of the core is used to cut a hole through the knuckles.  The tolerance between the rubber core and knuckles have to be perfect so they will fuse together.  If the geometry interpenetrates at all the different materials may not get assigned correctly.  A stand-in is made for the armature wire and used to cut a hole through the rubber core.

I wanted the suckers to be rubber as well.  I made them beefier than the first test tentacle and they are fused to the knuckle as well. 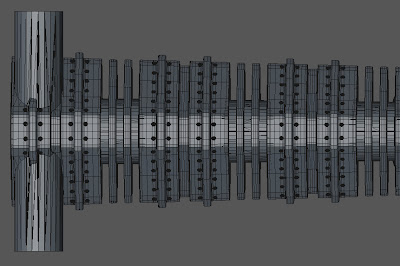 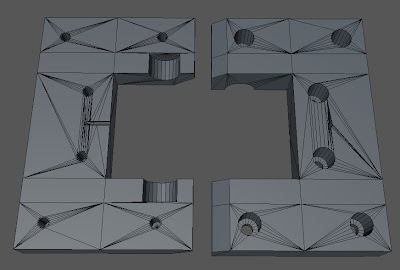 Finally, I need to figure out a way to mount the tentacles to the main body.  I decided to try a simple pivot pin.

I built a rough bracket to mount the tentacle to. It also incorporates a clamp for the armature wire to keep it from twisting inside the tentacle.  I bought very small screws to assembly the clamp.  Using manufacturer CAD drawings to get exact measurements, I made a stand-in for the screws which I used to boole out the recessed holes. 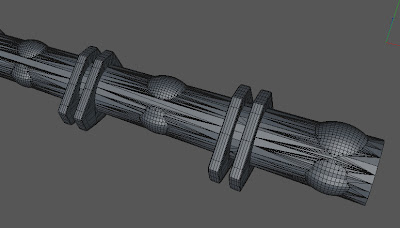 I also made a tentacle version which had slide on knuckles, rather than fused to the rubber.  The rubber core has bulges to hold the knuckles at the right position.  This is detailed more in the video below. 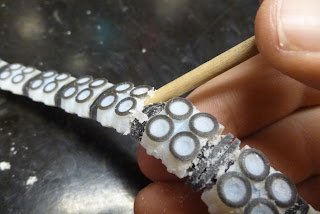 One disadvantage to this design was all the recesses made it a pain in the butt to clean.  It's one of the big reasons I'm looking at slide on knuckles. 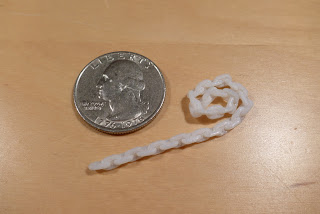 I did another chain test out of acrylic rather than a rubber mix. Turned out nice. Very flexible and pretty strong. Each link is separate.  Need to make the links just a tiny bit thinner to allow for better flex. 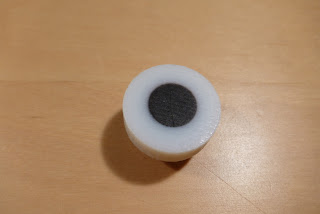 This was a simple test for fusing rubber to plastic. Normally I would take the rubber cylinder and use it to boole a hole in the plastic one.  This makes a perfect hole that allows the two surfaces to butt right up against each other without interpenetrating which can cause problems when assigning materials to parts.  In this case, I made a plastic tube and then a rubber cylinder with the each same dimension as the inner plastic tube diameter.  It fused perfectly.  This will save time during the modeling process since I don't have to boole it.


The other major advantage to this is once items are booled it can create some messy geometry.  There have been times that I needed to add edge loops or modify geometry after it was booled and it got ugly or even impossible to do.  Often I would have to go back to an earlier pre-boole version and start over.


CONCLUSION:
This test turned out better than I could have hoped and I think I have a mostly final design for the tentacle.  It's super-flexible and looks cool.  The thinner armature wire worked well and the hinge is a good first step.  I plan on further investigation of the slide-on knuckles.
at 9:07 AM